Police have requested iPhone users to stop saying ‘nine eleven’ to Siri since there has been a spike on the hang-up emergency calls, they believe, due to jokes in the social media that challenge people to ask the voice assistant about 9/11. 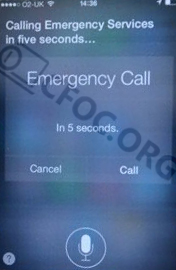 If a user says the words ‘nine eleven’ to Siri, the service dials the emergency police response call centres. After the joke flooded the web, there have been reports of around 100 hang-up calls in just 2 hours.

Be on the lookout for daring jokes, similar to ‘Ask Siri about 9/11’, ‘Say 9/11 to Siri and see what will happen!’. It appears that Apple has created several emergency dial commands for its voice assistant with the hope of making it more helpful, but as it turns out in some situations, such as this one, a fake call can be placed.

This is a serious matter since the police call centers have protocols to call back every number to clarify whether there is an actual emergency or not. And when the calls become many, it worsens the emergency response time of the force since it might become a timely challenge to identify which calls are hoax and which ones should be responded to swiftly.

Also, an interesting detail about Siri is that some security enthusiasts reported that dialing and hanging-up emergency calls might be able to unlock the phone without requesting a passcode. Another rumour that many social network users spread is that it a call to 911 will be initiated if you ask ‘Can jet fuel melt steel beams?’. However, this did not happen when we tried it. Instead, Siri replied with: ‘Airplane mode is off.’ So think twice before choosing to trust any 9/11 Siri related statuses on the social media.

What Should You Do?

It is highly recommended to spread the word and advise others to not ask Siri about 9/11 because this is a serious matter and might get you into trouble. Also, there is a possibility that it may delay an actual emergency so be careful when using the voice assistant.